Manual manipulation of the spine and other joints in the body have been around for a long time. Ancient writings from China and Greece dating between 2700 B.C. and 1500 B.C. mention spinal manipulation and the maneuvering of the lower extremities to ease low back pain. In fact, Hippocrates, the famous Greek physician who lived from 460 to 357 B.C., published a text detailing the importance of manual manipulation. In one of his writings he declares, “Get knowledge of the spine, for this is the requisite for many diseases”. Evidence of manual manipulation of the body has been found among the ancient civilizations of Egypt, Babylon, Syria, Japan, the Incas, Mayans and Native Americans. 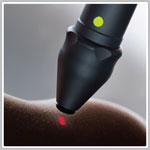 HOW COLD LASER WORKS
When the body has an injury the cells are damaged and fail to function within normal parameters. Low level lasers from the Cold Laser machine penetrate deeply into the skin and work by restoring this abnormal cellular function. Cold Laser uses a non-heat producing light laser, which is locked at a specific wavelength that is optimal for treatment and can penetrate deeply into tissue. Cold Laser or Low Level Laser Therapy is emerging as the therapeutic modality in the healing arts community.

Laser therapy may be useful for the following:

PROFESSIONAL ATHLETES: To treat top athletes in order to return them to competition at a much accelerated pace. If you remember, last year, Lance Armstrong and the US Postal Service team were involved in quite a few bad wrecks, yet they were able to race the next day. According to Jeff Spencer, Armstrong’s chiropractor who treated him with Cold Laser, if an injured athlete can get in for laser treatment within 2-3 hours of the injury, rehabilitation time can be cut in half.

BURN VICTIMS: To accelerate wound and burn healing, at a rate 25-40% faster and with less scarring. This is an excellent demonstration of external healing reflecting what is happening on the cellular level, where internal healing is often neither seen nor felt.

NERVE AND SPINAL INJURIES: To rehabilitate severed nerve bundles, at a rate of 300% faster than a control group tested in a University of Health and Sciences, Bethesda, MD., (research study conducted by Anders and Broke). This was after only 14 daily, 90 minutes treatments. It suggests promising results will be found in the future for peripheral nerve damage and possible spinal cord injuries.

OTHER INJURIES: To increase the range of motion (ROM), to increase muscle strength, to decrease pain and inflammation and to accelerate overall healing time for a variety of injuries. Chiropractors and physical therapists use the cold laser for whiplash-strain-sprain, chronic frozen shoulder, long standing TMJ problems, carpal tunnel syndrome, fibromyalgia, sinusitis, etc.

The Cold Laser, or Low Level Laser Therapy, can be used for:

BENEFITS:Lasers are painless, sterile. No undesirable side effects. Much more affordable than surgery.

EXPLANATION OF LIGHT (LASER) THERAPY
“Light therapy is not a new concept. The sun’s photonic rays cause a seed to sprout through RNA and DNA changes. The sun’s rays are full-spectrum light, which means many wavelengths are present (400-800 Nanometers), but only one specific wavelength, or frequency, causes the seeds to germinate. In 1924 Bose and Einstein, great men of science, predicted the Laser. Laser is an acronym for Light Amplification by Stimulated Emission of Radiation.

In 1978, Dr. Frolich helped to establish the Wave Particle Theory, which now forms the foundation of quantum physics and defines the mechanism of life, as we now know it. Human cells, tissue and organs have specific frequencies that regulate important cellular functions such as protein synthesis, cellular division and communication. Frolich used quantum physics to explain that a cells living matrix must produce coherent or laser-like oscillations, unique resonance’s. He stated that these resonance’s serve as signals that integrate processes such as growth, injury repair, immune mediation and the overall functioning of the organism. Each molecule, cell, tissue and organ has an ideal resonance frequency that coordinates its activity. Using certain laser frequencies can alter or balance the body’s systemic defense and repair mechanism.

In 1994, Dr. Smith stated that pathologies manifest themselves as chemical imbalances with the underlying cause being electromagnetic. By applying a specific frequency, normal function and balance can be restored. Physicists Schawlow and Townes brought the laser into modern medical arenas, where they are being used for a variety of treatments. Most of the lasers used in the medical field have been High Frequency Hot Lasers, which are catabolic (destructive) in nature such as the ones used in eye surgery. Cold Lasers are anabolic, or regenerative in nature.

Laser therapy is based on photochemical and photobiological effects of the cells and tissues. With laser light, cell functions are stimulated, especially the increase of a cells ATP (energy). This increase in ATP synthesis is associated with increased cell metabolism; increase collagen synthesis, stimulation of DNA formation, improved immune system function and increased new formation of capillaries. The laser also has been shown to increase neurotransmitters (serotonin), to increase enhance tissue regeneration through increasing fibroblasts and keratinocytes, to increase antioxidants and to accelerate bone and scar healing.

You can also go to www.erchonia.com for more information.

Much of muscle pain stems from various conditions; strain, lactic acid build up, scar tissue, etc… The DMS uses percussion, mechanical vibrations that reach deep into the muscle tissue to stimulate proprioceptive functions. No other device on the market matches the effectiveness of the DMS.

The DMS provides deep muscle tissue with kinetic forms of percussion and concussion vibration, which in turn facilitates the patient or athlete with the benefits of: 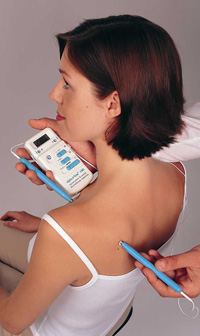 Nothing relieves pain and enhances the quality of your life as easily, effectively, and safely as the Alpha-Stim 100; a sophisticated bioelectric therapy device. Alpha-Stim 100 represents a revolution in the treatment of the body & mind based on recent advances in our understanding of biophysics.

Cox®® Technic (aka flexion-distraction or F/D) relieves back and leg pain and neck and arm pain. Disc herniation and/or stenosis may be the cause of pain. Or simple arthritis or a back sprain may be the culprit.

95% of back pain and neck pain patients DO NOT require surgery.

Cox®® Technic is a safe alternative to back surgery. It is also appropriate for failed back surgery patients who still suffer after surgery.

Cox®® Technic is a well-researched, well-referenced (with over 90+ articles in medical and chiropractic journals) chiropractic spinal adjusting technique.

Cox®® Technic stops pain, realigns the spine and restores ranges of motion inherent to the spine while reducing low back pain, especially in radiculopathy (Pain that travels in legs or arms) patients, better than active exercise therapy.

Cox®® Technic is DOCTOR-APPLIED, DOCTOR-CONTROLLED, HANDS-ON, SPECIFIC CONTACT, PATIENT-FOCUSED care. During a treatment on this instrument, the patient lies on their stomach while the treating physician concentrates on one vertebral motion segment at a time. The goal is to reduce stenotic effects (pressure on the spinal cord or spinal nerves) by dropping the pressure within the disc, thus allowing disc reduction, increasing the size of the foramen from which the spinal nerve exits the spine, and lowering pressure on the exiting nerve. While concentrating on the low back, the doctor may use the instrument’s caudal (the part the legs lie on) section to allow lateral and circular motion which returns normal motion to the spine with reduced pain. The cervical spine can be treated similarly using a specially designed table. * The specialty recognition identified herein has been received from a private organization not affiliated with or recognized by the Florida Board of Chiropractic Medicine.

Font Resize
Contrast
Accessibility by WAH
Call Us Text Us