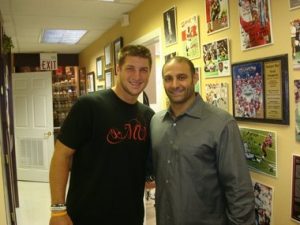 Flint native Dr. Richard Shaker (right) has worked as a licensed chiropractor in Tampa, Fla. for 20 years. In 2008, he helped NFL quarterback Tim Tebow (left) get through a knee and shoulder injury while attending the University of Florida.

But Tebow needed a little help from a Flint native to follow through on that promise.

With pains in his knee and shoulder altered his throwing motion and ability to burst through the line of scrimmage, Tebow turned to Dr. Richard Shaker for help.

“I fixed him and he’s on to do commercials,” said Dr. Shaker, a licensed chiropractor in Tampa, Fla. for 20 years. “After one treatment, he felt phenomenal.”

Although Tebow may be the most notable athlete that he’s worked on, Shaker has helped many other athletes get through injuries. He’s treated lots of professional baseball players, football stars, and wrestlers. 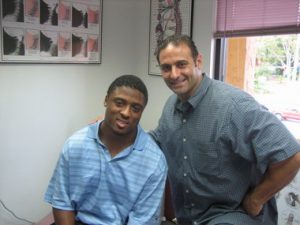 Dr. Richard Shaker (right) has helped many professional athletes get through injuries. Former NFL running back Warrick Dunn (left) was one of his past clients.

“A lot of these famous athletes come to me because I’m not the average chiropractor,” said Shaker, a 1980 Flint Powers graduate. “I’ve got techniques that are way better.”

Shaker, 50, is a certified Chiropractic Sports Physician. He also has extra training in sports medicine and is a licensed rehab physician.

He has a post-graduate degree in physical therapy and is a Registered Trigenics® Physician (RTP) with many other medical certifications that he acquired through his many years of schooling.

Although Shaker holds several titles, a chiropractor’s main job is to put tissue back into alignment while taking pressure off the nerves. Bodies can get out of alignment by everyday activity so his main focus is to fix this issue and every patient is different.

“Most of us will spend like 5-10 minutes with a patient but he will spend like an hour with a patient,” said Dr. Greg Zwirn, former President of the Hillsborough County Chapter of the Florida Chiropractic Society. “He’s almost too detailed because I don’t have that much time to spend with each patient but he makes that time and he gets the results.”

Dr. Zwirn calls Shaker the “Chiropractor’s Chiropractor.” According to Zwirn, Shaker is a workaholic who has mentored him for the past 12 years. Zwirn still aspires to reach his mentor’s level.

“For most of us the wheel works because the wheel works and we don’t try to reinvent the wheel but Shaker tries to reinvent the wheel,” Dr. Zwirn said. “With the knowledge that man has, he knows more than some of the people that wrote the books because of his higher education that he’s taken so he’s on a much deeper level of knowledge than most of us because he’s taken those extra courses and is so proficient in his technique.”

Shaker was a star high school athlete for the Chargers in the 1980s.

He helped Powers Catholic win a state championship for baseball in 1980 and was named to the All-State team in his senior year as a shortstop. In college, he played baseball at Hillsborough Community College and at the University of South Florida but gave up the sport to pursue his doctorate degree.

“As he got older he kept developing and maintained that desire to succeed,” said Bill Haley, Shaker’s high school baseball coach at Flint Powers. “Shaker had the capacity to go to the highest level in baseball but his timing and conflicting goals held him back.

“He was more talented than many of his peers but the timing wasn’t there for him,” Haley said. “He devoted himself to his new craft while maintaining a connection to athletics.”

Shaker’s move was a smart one. He claims he’s made over a million dollars throughout his career but raking up cash wasn’t the biggest fulfillment.

“I didn’t get into what I do just to make money,” Shaker said. “I got into it because I’ve got a passion. Since I was not able to fulfill my pro career my passion is being able to save other guys careers.”

Font Resize
Contrast
Accessibility by WAH
Call Us Text Us